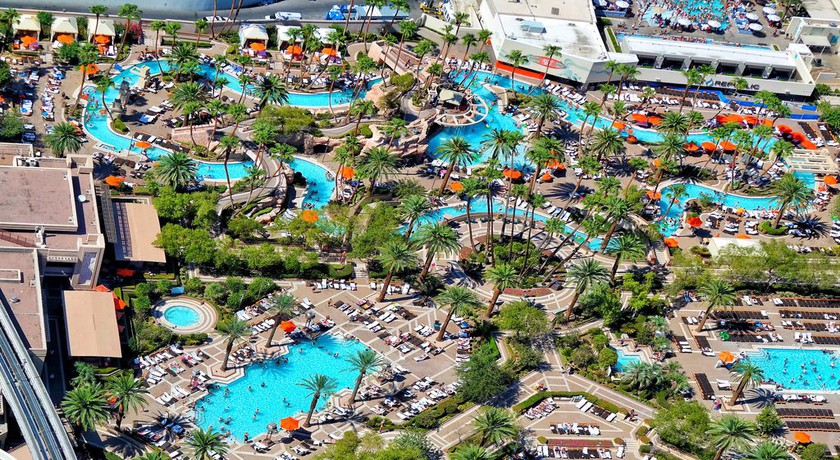 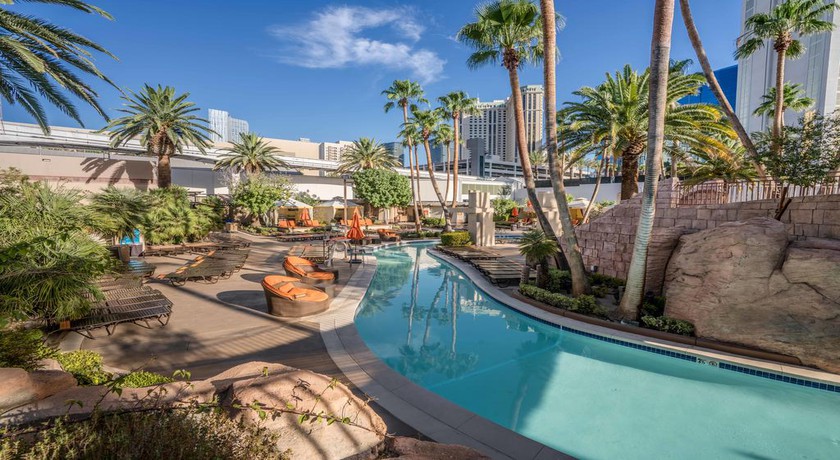 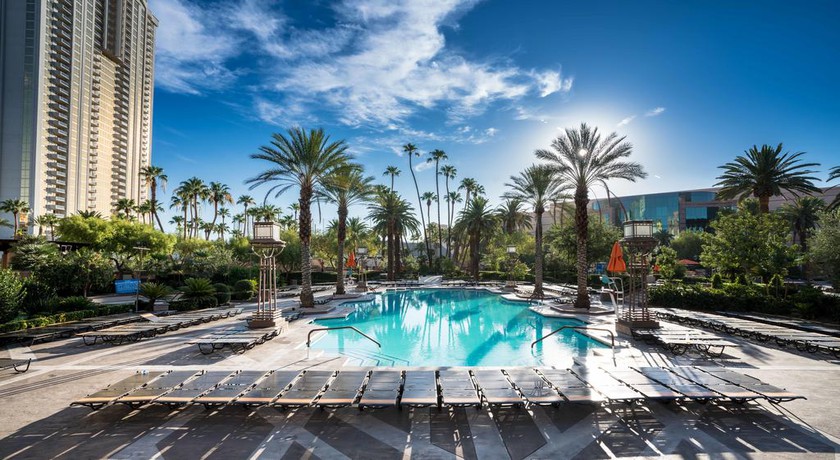 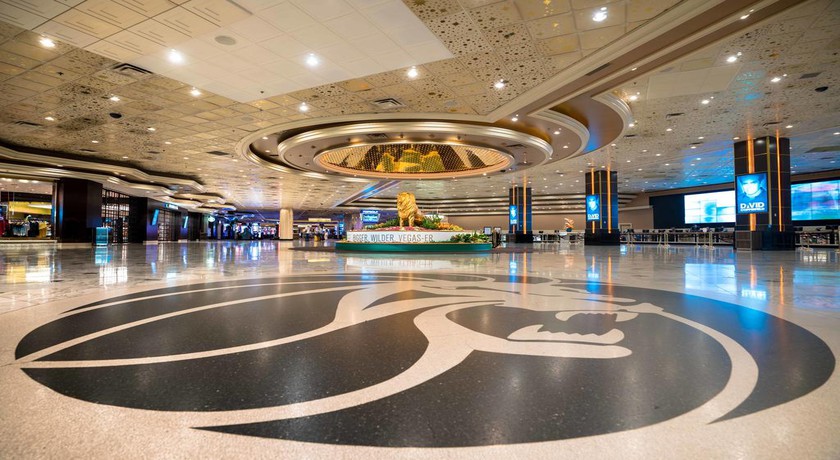 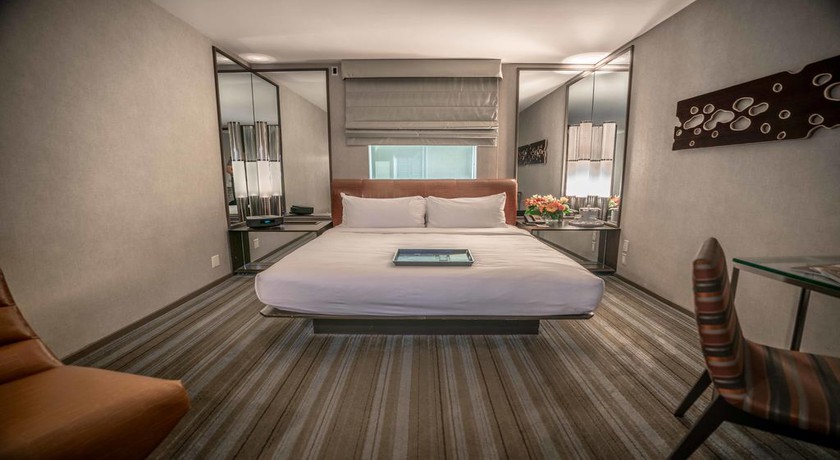 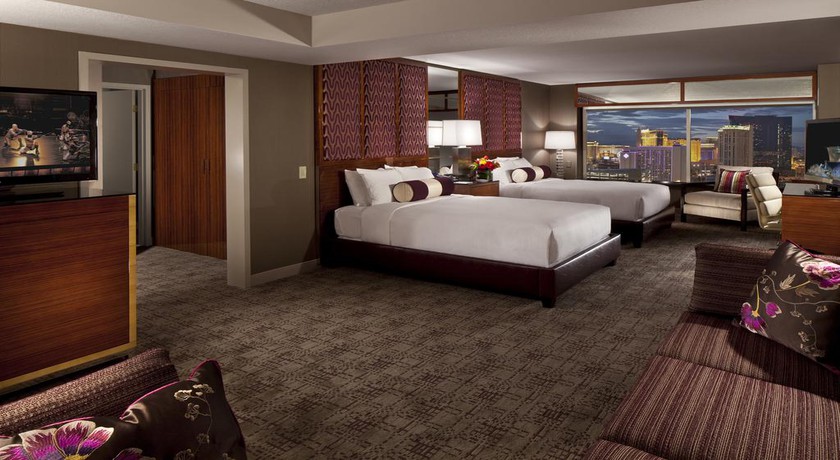 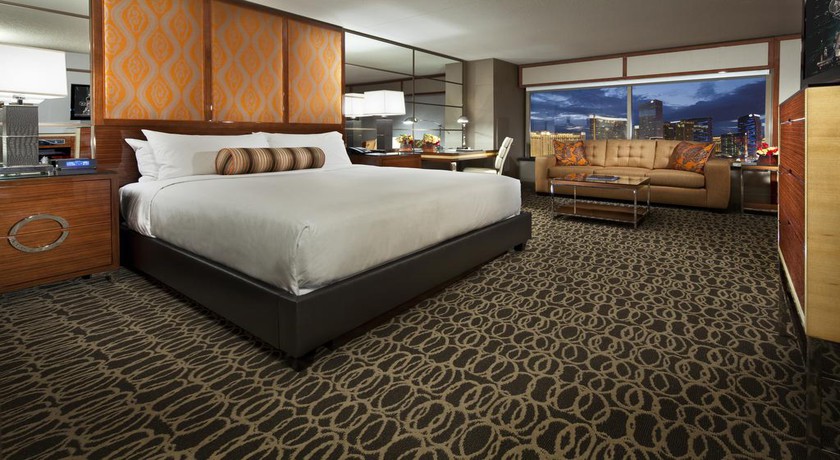 The MGM Grand, which stands pride of place in the heart of the iconic Las Vegas Strip is the largest single hotel in the United States of America with its 5124 rooms. A hotel so revered it has become a landmark, MGM Grand Las Vegas comprises 30 floors, five outdoor pools, the Grand Garden Arena and a vast area to home its own famed shopping, dining and entertainment facilities, not least its huge in-house Casino. The art-deco influenced guestrooms incorporate plush fabrics, polished woods and glamorously appointed furnishings, complemented by photographs that showcase MGM studio’s film stars in casual settings within the main corridor of each guest floor. The spectacular Grand Pool complex offers guests the unbeatable opportunity to indulge in 6.6 acres of tropical bliss, with the five swimming pools surrounded by waterfalls and lush foliage, three whirlpools, and a lazy river. MGM's Grand Spa features everything from luxurious facials and nail services to soothing massages and body wraps, while a star-studded entertainment bill features world-class acts performing for your pleasure. If you're going to book a Las Vegas holiday, MGM Grand is the ultimate hotel to experience it to the fullest.

MGM Grand is located in the Las Vegas Strip, making it perfect for those who wish to experience everything Las Vegas has to offer more easily. The nearest airport is McCarran International Airport is only 2.2 miles from MGM Grand.

MGM Grand is world famous for its entertainment options. Joint the party at Wet Republic and savour your favourite cocktails at Losers Bar or head to Hakkasan, the hotel’s nightclub for headline shows from world famous DJ acts, including Calvin Harris. Whiskey Down has an impressive selection of spirits, while Topgolf is a new and innovative game parlour, where you can play interactive games of golf. The hotel has five outdoor pools where you can relax and enjoy the Vegas sun. The hotel’s showcase piece is, of course, the casino, where one can play all manner of roulette games, slot games and poker games across its vast 17,500sq.ft of space.

Is there valet parking at the MGM?
Yes, car parking by valet is offered.

Does the hotel have coffee making facilities in the room?
No, but there are many coffee shops open throughout the day and night at the resort.

How much is Buffet Breakfast at the hotel?
Around $25, it may be better to have breakfast included in your package.

How many pools does the hotel have?
Two, plus the lazy river.

Does the hotel give free toiletries daily?
Yes, Healing Pools toiletries for hair, bath, shower and skin are available daily for free.

Is there a charge for using the gym?
It’s included in the resort fee.

Can you leave your luggage at the hotel while you explore the city?
If you arrive early you can ask for an early check or drop your luggage with the front desk who will care for your luggage.

Is this the same MGM Grand that hosts boxing events?
Yes, boxing is at the MGM Grand Garden Arena, which is part of the resort.

What sort of entertainment is there at the MGM Grand?
The MGM boats the largest casino in the whole of Las Vegas and is home to over 20,000 slot machines. There are five outdoor swimming pools, a lazy river, the famous ‘Studio 54’ nightclub, and a virtual reality gaming arena. There are frequent live music concerts, magic shows, and other entertainment, such as Cirque du Soleil. How many rooms are there?
The MGM Grand is the largest single hotel in the United States, with 5,044 rooms. It was the largest hotel in the world when it opened in 1993.

How many restaurants are there at the MGM?
The MGM Grand has an amazing 26 individually themed restaurants. There are upscale venues like Tom Colicchio's Steakhouse and Morimoto’s. Additionally, there are lots more casual eateries serving a huge variety of food such as Greek, Mexican, Chinese, to name just a few. There is also a food court with several fast-food restaurants.

Does the MGM have mobile check-in desks?
Guests can check-in and unlock rooms with the MGM Resorts app.

What are ‘Stay Well’ rooms?
Stay Well rooms are designed by Dr Deepak Chopra for the MGM to renew, recharge and refresh the resorts guests. They feature air purification, aromatherapy, specialised energising lighting, showers infused with vitamins to reduce chlorine and use non-toxic cleaning products.