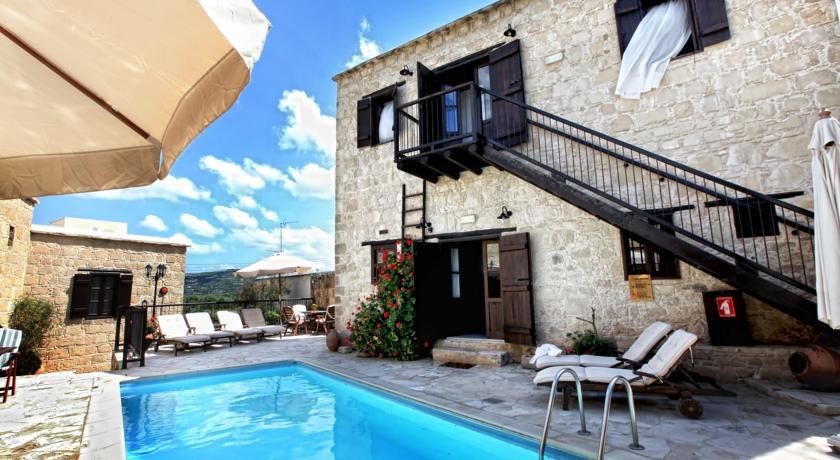 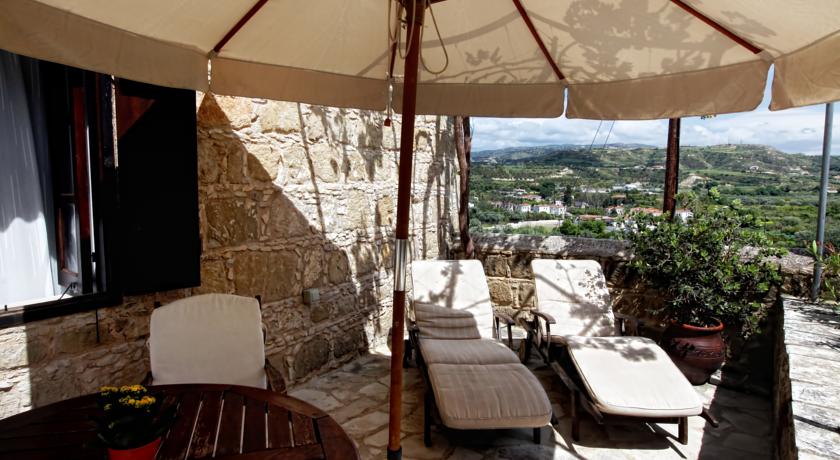 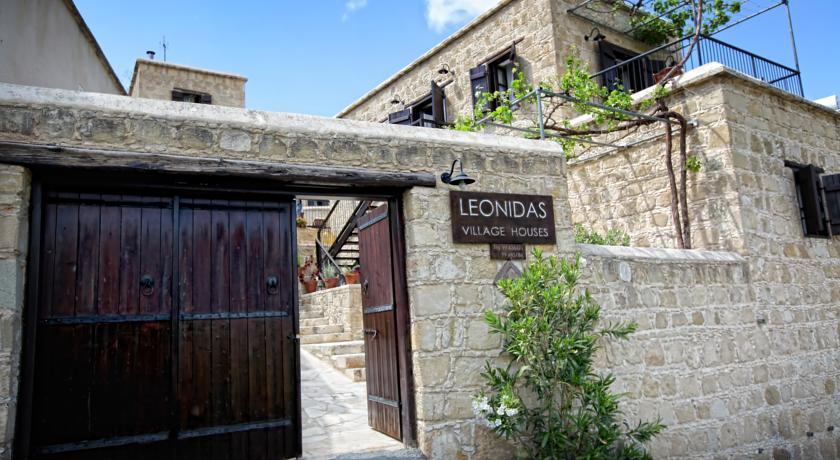 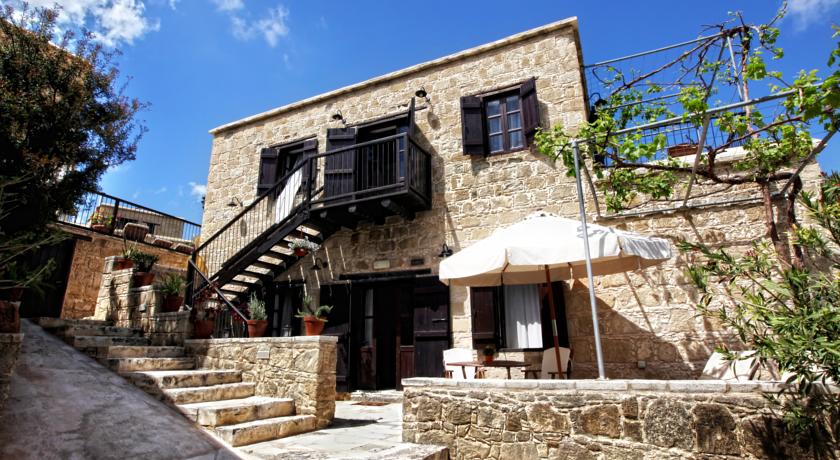 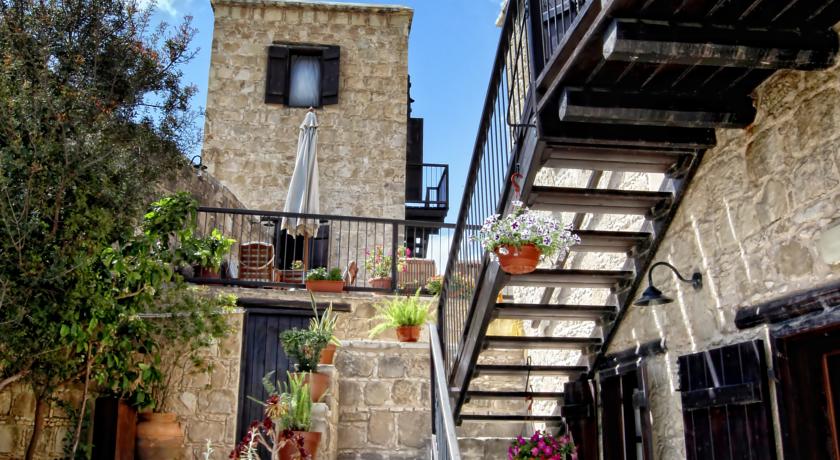 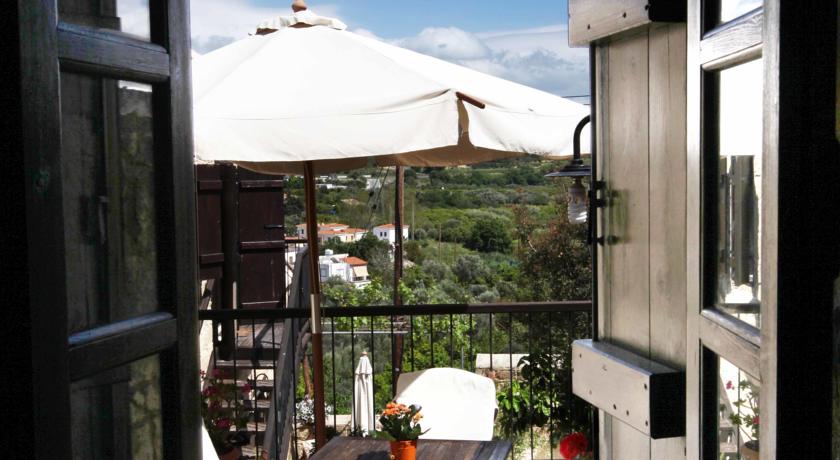 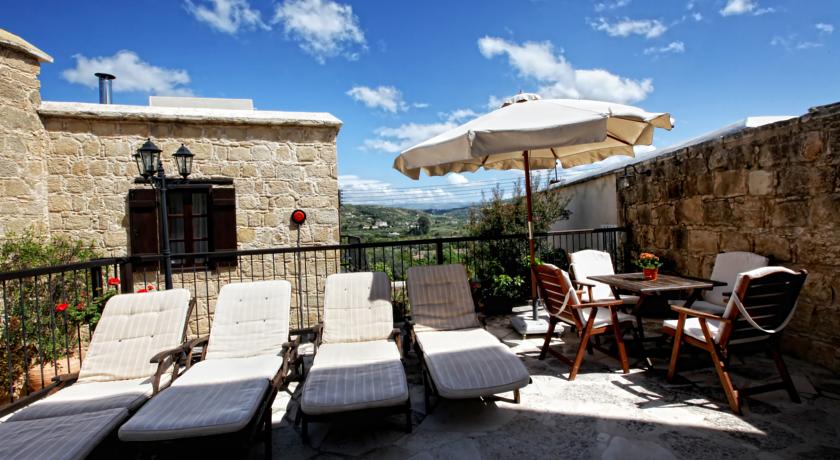 Fully furnished houses Fire place Satelite television Hairdryer Iron/iron board Laundry facilities (extra charge) Fully equiped kitchen Yard Veranda Swimming pool Chairs-umbrellas Baby Cot on request Parking Goudi Village Goudi is a village in Paphos county in the Chrysochous valley. It is situated 100 meters above the sea surface and it is spread in a mild slope between 60 and 120 meters. The village has annual rainfall about 575 millimeters and in the area cereals ,legumes,caporal,use plants ,vegetables ,vines ,citrus,almond trees ,olives and carobs are cultivated.In the village there are two olive mills that work today Goudi met continuous population increase until 1960 while later the decrease of the population of the residents started because of urban attraction and migration that hit all the villages of the area More specifically the residents of the community in 1881 were 110, were increased to 199 in 1911, to 218 in 1931 and to 277 in 1960.After 1960 the phenomenon of Urbanism and Migration star to appear as a result in 1973 the population to be decreased to 175 and 1982 to 165 .In the population census that took place in 2001 the residents of Goudi were 156 Goudi is connected to the south and southeast with the villages of Holli, Skoulli and to the east with the main road of Paphos -Polis. It is 6 kilometers far from Polis and has a distance of 250 meters from the river of Hrysohous The most important source that there is for the origin of the today settlement is Mas Latri who mentions the village with the name ‘Vouti’.the same writer includes it in the list of the Louzinianovenetikon royal fields and with 11 other villages placed them in Chrysochous county Kappa;. Peristianis notes that in Goudi language was taught before the English occupation.But the writer observes that the students were only taught reading For the name of the village ,according to an interpretation ,came from tha name of the first settler or owner of the village who was probably named Goudis .It is possible tough to come from the word Voutima (steep, dip in water )or vouttin ;(small earthenware jar Distances from Restaurant/ Coffee shop: 1km Beach (Akamas Bay): 7 km Polis : 5 km Baths of Aphrodite: 10km Hospital: 5km Places of Interest Akamas Baths of Aphrodite

The houses were initially build in the 19th century and were recently reconstructed according to the traditional architectural traits and building materials. They were built in the traditional Cypriot style with full respect to the past and the entire acute has been restored in detail to adhere to the Cypriot era, therefore providing a unique atmosphere. If you are interested in agro tourism in the form of relaxing and luxurious holidays in a rural environment LEONIDAS Village houses is the perfect destination Studio Residence situated in the pool area ground floor. Comprises of one room with a traditional double bed, a fully equipped open plan kitchen, bathroom with shower 1 Bedroom Residence situated in the pool area with 2 inner levels. The first floor reached by a wooden staircase comprises of one bedroom with a double bed, bathroom. The ground floor comprises of a living room, a sofa which can accommodate one extra person, open plan fully equipped kitchen with a dining area, bathroom with shower 1 Bedroom House

Residence situated on the ground floor pool area. Comprises of one separate bedroom with 2 single beds which can be made up as a double bed, separate bathroom with shower /WC, large living room, a sofa that can accommodate one extra person, and a separate fully equipped kitchen with dining area 2 Bedroom The first floor reached by outdoor wooden staircase comprises of two separate bedrooms, one with a double bed and the other one with two single beds sharing bathroom with shower The ground floor comprises of a living room, a sofa that can accommodate one extra person, dining area, open plan fully equipped kitchen, bathroom with shower SITUATED IN VILLAGE OF GOUDI Situated in the picturesque village of Goudi a short drive away from the bustle of Paphos, close to the unspoilt little town of Polis with its charming fishing village of Latchi and just 5km away from the scenic beaches of the Akamas Bay, Leonidas Village Houses is a complex of 5 individual traditional houses sharing a common yard, garden and swimming pool with a panoramic view to the village valley

Call me I want to book
a holiday
Thanks for reaching us. Our experts agents will call you soon to
discuss your holiday requirements.
Expert Advice - Which destinations to visit
and when
Recommendations - Tailored to your
budget
Flights & Prices - A variety of options to suit
you
Extras - Book airport parking
Spread the cost Pay monthly
Low deposit from £49 pp *
CAR Protected
7.4/10 We’re rated ‘Great’ with over
1,605 customer reviews
Close
DESTINATIONType any destination here
Please enter a destination
DEPART FROME.G. ANY IRELAND
Please enter an airport
NIGHTS7
GUESTS2 ADULTS, 0 CHILDREN
Some of our most popular destinations*Type your choice to reveal more destinations